One of the things that my clients like in my work that I always like to do my best in providing technical Proof of Concepts in findings I discover. This makes it easier for technical departments to reproduce the issues, and also a nice way to show how bugs and issues can be actually exploited.

When I report it initially to the company, the team thought that it would be an acceptable risk to leave it there.

I believe Apache server-status should not be accessible, as it pose a major privacy and security risk.

What Information can be exposed?

What do we need as attackers?

We need a script that constantly monitors the exposed Apache server-status, and extracts all new URLs, and save them for later testing.

Also, if we are performing an intelligence engagement, we would need all IPs that interacts with the Apache server that hosts our target website, along with requested URLs. Then we need to constantly monitor the service on the hour.

What have I done to solve the issue?

As a penetration tester, I believe that without an actual PoC, the attack would be theoretical, simple as that. PoC || GO is the rule of the game.

So, I wrote server-status PWN.

server-status PWN constantly requests and parses Apache server-status pages for any new event. Whenever a new URL is requested or a new client IP address is used, it will be logged and reported. It outputs the logs in a SQLITE3 database.

The tool basically did exactly what I needed, if anyone have additional ideas that would like to push it into server-status_PWN, let me know and I will be happy to implement it.

If you have a project or would like your application/network to be tested, I provide freelancing penetration testing services. Feel free to email me at

The Apache Foundation has made changes to their official Apache server-status instance, which was made available at: https://www.apache.org/server-status

Initially, it was publicly and intentionally accessible. Now, it shows a large notice stating that the data is “static data” and do not hold any users’ data or information. Great job as always by Apache Foundation in protecting the user’s security and privacy. 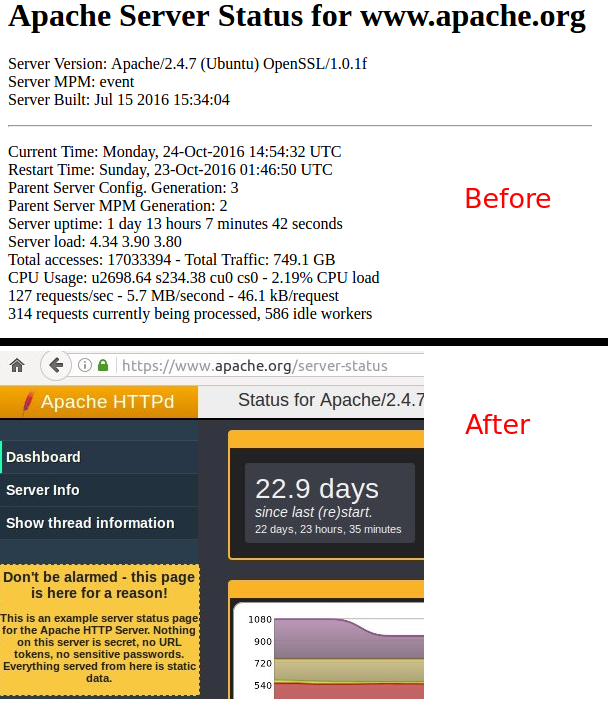