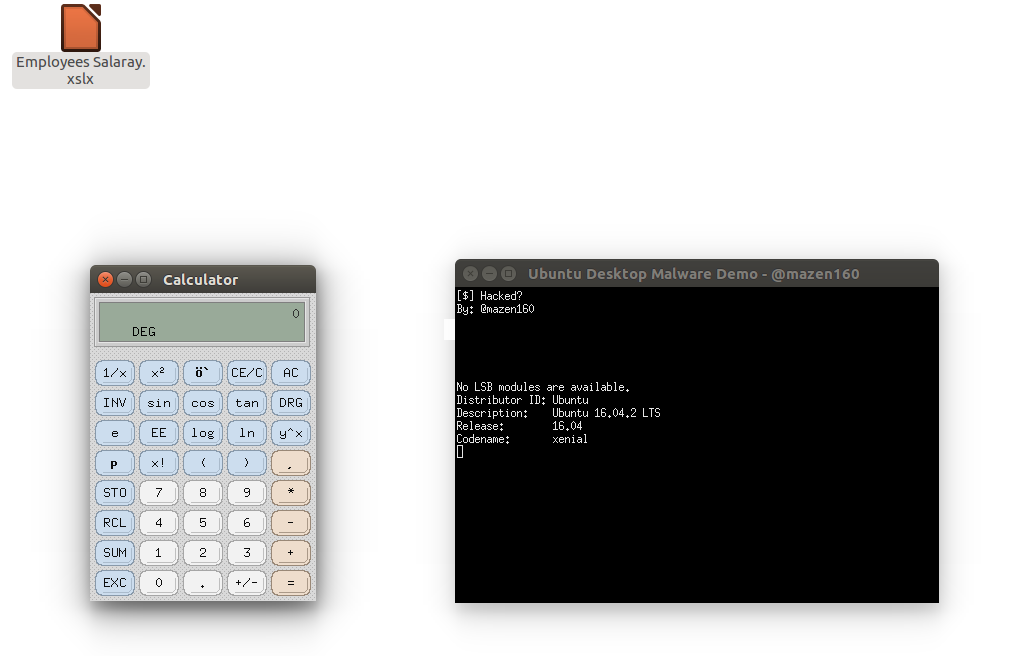 I have noticed a weird behavior in .DESKTOP file extensions that can be used as a malware vector. This issue is not detected as malware by all known AVs, and the way it behaves makes it a rich resource for spreading malware against Ubuntu and Linux Desktop users in general. I will focusing on Ubuntu Desktop on this blog post.

File managers on Ubuntu (Nautilus, Caja, Thunar are tested) treats .desktop in a special way. Basically, it parses .desktop, and view the files as the way it’s saved on their .desktop entry. In addition to that, it also changes the icon of the file to the one specified in the .desktop entry too.

Let’s say the filename is “firefox.desktop”, and it’s saved at “/root/test/”

when navigating to “/root/test” via a file manager, we will see a file called “Firefox Browser”, and Icon of Firefox, instead of seeing a file called “firefox.desktop”.

One of the most interesting entries is “Exec”. Basically, it will take the input, and pass it to shell to be executed. That doesn’t sound nice.

We can simply inject a payload there, along with a custom crafted .desktop design that mimics an interesting file.

Saving the file as “payload.desktop”, when it’s viewed, it will be viewed thanks to file managers as “Employees Salary.xslx” with LibreOffice icon. Once a user click on the file, the payload will be executed.

Executing permissions would be an issue in exploitation. When a .desktop file does not have an execution permission, we get the following the error:

This error can be bypassed by presetting the permissions to 07555 for example to be executed, then ZIPPing the file, and delivering it as a ZIP archive, when it’s decompressed, the same permissions will be outputted. Now the malware vector would work normally with any distribution that supports .desktop extensions.

I have made a test repository that holds a simple PoC that will pop-up a calc.

To test on your local machine:

then navigate to the “Demo” folder using a file manager, you will see the following when clicking on the file:

I have contacted Ubuntu security, and they have decided to accept the risk of this issue. Therefore, the issue is still there, and affects millions of users online.

It’s quite difficult to recommend stopping the usage of File Managers to mitigate the issue. However, I recommend checking/opening untrusted files via CLI. This helps in detecting the exploitation of .desktop malware vector.

This was a cool idea I had in my mind that I thought of sharing it. I’m looking forward to your opinions regarding this technique.